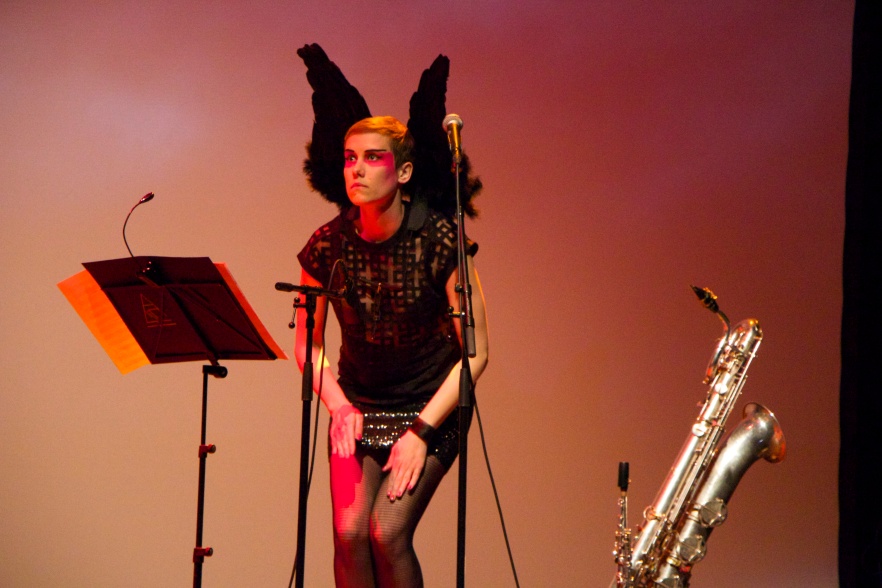 Her latest music theatre work, staring at the bin, had its world premiere and 30 performances at the Munich Biennale 2016, along with an accompanying exhibition.

As well as being a founding member of Aside she performs regularly in music theatre and theatre a.o. in the Berliner Ensemble, Munich Biennale, Radial System, Berlin and Theater Basel.

As a member of the ensemble DieOrdnungDerDinge (www.dieordnungderdinge) she creates staged concert programmes that explore the space between concert and theater/performance in a visual, playful manner. They perform internationally in venues such as the Guggenheim, Bilbao, Haus der Kulturen der Welt, Berlin, Schauspielhaus Zurich, Grüner Salon (Volksbühne) Berlin.

As a saxophonist she performs with ensembles such as the Berlin Philharmonic, MDR Symphony Orchestra, Stargaze and Redux. With the Redux Orchestra she recorded Symphony X, and performs the installation version, created together with artist Tino Sehgal, in festivals such as the Springdance Festival, Utrecht, in K21 Düsseldorf and KW Berlin.

Too many sentences that start with “As”

As a visual artist she specialises in projects that combine visual art and music such as “Wer ist der Mächtigste auf Erden?” (Lucerne Festival, book published by Nordsüd). She has also produced installations for festivals such as the Martinu Festtage, Basel, Tempelhof Theater Festival and the  Blind Spot Film and Music Festival as well as puppet design for the Marionettentheater Basel.

When Meriel first met Michael she was a little disconcerted by him as she felt he could see through her. However after working together with him for many years she knows he can and has learnt to deal with it.

Meriel Price studied at the Royal Northern College of Music, Manchester and was awarded a DAAD scholarship to study at the University of the Arts, Berlin. Before this she studied visual art, specialising in sculpture, at Berkshire College of Art and Design.

Johann-Michael Schneider is an actor and director.

He also works as a narrator/speaker for works such as “…die Hölle aber nicht” a composition by S. Litwin, performances with the Ensemble Resonanz.

As well as in the theatre, he also works as a director with musicians and performers such as the clair-obscur saxophone quartet, the piano duo Jost-Costa (in their concert series for children in the instrument museum in Stuttgart)

And with Meriel Price…

He studied German Language and Literature and Philosophy at the University of Göttingen.

Johann-Michael Schneider is a violinist and theatre musician.

He has developed and written music for theatre for numerous works such as “Faith, Hope and Charity” by Ö. v. Horváth, “The Damned” by L. Visconti, “The Imaginary Invalid” by Molière, “The Blind” by M. Maeterlinck and “Woyzeck” by G. Büchner, at theatres such as Staatstheater Oldenburg, Schloßtheater Celle and Schloßtheater Moers. He is the musical director of Theater Reutlingen since 2007.

He studied violin at the Hochschule für Musik und Tanz, Cologne and was awarded a diploma with distinction.

(For Aside both biographies)